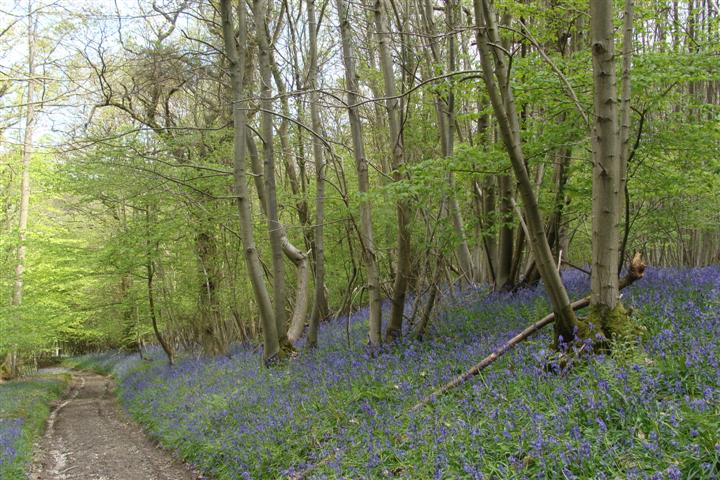 Welcome to the Blog of Cutler´s Wood, an Ancient Semi-Natural Woodland in the Kent North Downs AONB (Area of Outstanding Natural Beauty).

Cutler´s is 42 hectares (ca. 103 acres) of native broadleaf woodland managed primarily as wildlife and flora habitat but also to provide some timber from coppice rotation which is used for traditional fencing and woodfuel. Adjacent to Cutler´s Wood is Cutler´s Farm, made up of the farmyard with barns and 6 hectares (ca. 15 acres) of pasture land, which presently is used for sheep grazing. 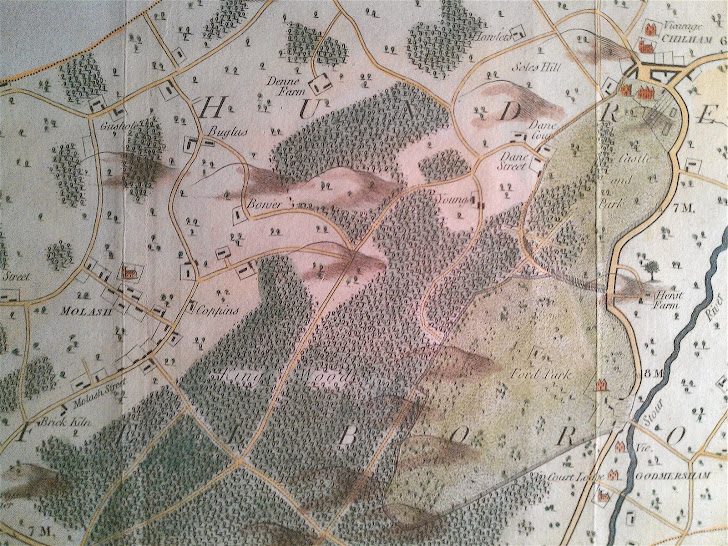 Edward Hasted´s map of Cutler´s area published 1798 but showing the area apparently around 1778. Cutler´s Farm seems not to have existed yet.

Look, there are some deer ! Deer are very common in and around Cutler's but to many people they are just deer, almost as if there were only one type of deer in the UK. Actually, there are six different types of deer in the UK. The indigenous red and roe deer, the fallow deer and the most recent introductions of sika, muntjac and chinese water deer.
All the wild deer around Cutler's are fallow deer. Fallow are really a semi-indigenous species in the UK, they were around during Norman times and may even have been brought by the Romans. Fallow were probably indigenous before the ice ages but migrated to southern Europe as the weather became colder and only came back with the Romans or Normans.
Roe and red deer became extinct in much of Britain due to overhunting and were gone from our area of Kent by 1700. Fallow on the other hand, being a herd animal, were kept in parks and estates (from which many escaped) for hunting and show and this is what most definitely saved them also becoming extinct.
Even though they are all called deer, roe, red and fallow have some quite significant differences and roe deer in particular are quite far removed from both of the other types, being more closely related to the elk of northern Europe than to red or fallow deer. Red deer are the largest deer followed by fallow and roe deer are considerably smaller. Both red and fallow deer tend to live in herds or groups depending on the time of year, whereas roe deer tend to live alone or in small family groups. The roe bucks are extremely territorial and can be very aggressive when protecting their territory.
Fallow bucks are easily identified by the flattened forked surfaces of their antlers. Both red stags and roe bucks have round forked antlers. Deer loose their antlers every year after which they immediately begin to grow a new pair. This is opposed to bovine animals (horned) animals which keep the same horns, which continue growing, for life. The age of horned animals can be told by counting the growth rings on their horns much like growth rings of a tree.
Fallow bucks loose their antlers around April, after which the new antlers begin to grow. During the growth period the antlers are covered with a velvety skin. After the growth period the skin dies off and the bucks will rub the skin off on smaller trees and bushes, which causes quite some damage to the bark. The antlers of older bucks will have finished growing by September i.e. a set of antlers will grow from nothing in around five months !
The fallow rutting season starts in October and goes into November. The bucks will turn up at the rutting places and can be heard over quite long distances by their grunting. One interesting fact of the fallow rut is that it is the does who choose the buck and not vice versa as with red deer. Girl power !
Fawns are born after 7.5 months in June or July, mostly a single fawn but sometimes twins.
As new born fawns are often not able to follow their mother, the mother will leave them hidden in undergrowth while she feeds. People coming across a young fawn often think it to have lost its mother. Leave it alone ! The mother is probably not far away and will return.
Fallow deer are not as selective as roe deer as to their feeding and can cope with much rougher food than roe deer. Fallow feed on grasses, herbs, leaves, buds, fungi, bark, chestnuts, acorns and all manner of farm crops and fruit which makes it an arch enemy of most farmers.
Fallow can also see much better than roe deer and can also detect non-moving subjects which roe often can't. If you come across roe deer and immediately stand still the chances are the roe will not see you and will ignore you if you are downwind of him. In the same circumstances a fallow will usually be long gone.
Roe bucks loose their antlers between October and December after which their new antlers grow until around May / June. The rut then takes place in August.
Now something amazing happens; after fertilization embryonic development is delayed for four months until December after which foetal growth starts and kits are born in May or June. It is this dormant state of embryonic development that has enabled roe deer to survive without the danger of their kits being born in the depths of winter.
Roe deer, although hunted to extinction in many parts of the UK have steadily been recolonizing the country for some time. They are present in western Kent but the channel tunnel high speed rail link and the M20 are barriers to migration. The M/A2 also presents a barrier to recolonization. However, in 2011 roe deer were first sighted living around the Faversham area which is only 8 miles from Cutler's and the British Deer Society is of the opinion that within ten years, roe deer will have successfully recolonizied all of Kent.
It will be a great day when roe deer, and later perhaps red deer, eventually recolonize the area.

Looking at the last post I see that has been over a year since I last wrote anything. Last September we took part in the Weald Wood Fair which was interesting, even if it didn't earn any money after costs were taken into account. There was certainly a fantastic atmosphere at the show and the live music on Saturday night was great. I think that this fair is an excellent opportunity for everybody who has anything to do with woods or timber to come together once a year. I did buy two oak huts there which were built at Plumpton College in Flimwell during oak frame building courses by students. These were transported to Cutler's and erected by the very capable people at Sussex Oak Frame Builders. These huts have been put up in the woods to act as shelters and hides for watching wildlife. Martin and John have been busy in December and January felling some sweet chestnut and then saw milling it to clad the roof and sides of the huts. The result can be seen in the pictures and I think is very good.  Being made of oak and chestnut, these huts will probably be around long after we have gone.

It was in November that we had visitors of the not welcome kind at the farmyard. Martin had bogged his Land Rover down at a neighbouring farm one evening. Normally the Land Rover was used to block in our timber trailer in the barn and would be chained together with the trailer. The next morning the trailer was gone. The thieves had come through King's Wood and cut a hole in the fence at the end of our field and got the trailer out, even though the timber grab was hung on a large log. It is obvious that the thieves are locals who know the area very well and had been watching our farmyard for some time. These people are the scourge of the British countryside but unfortunately the police seem powerless to do anything at all. In our case the police took down details but made no effort to try follow any tracks through King's Wood.

Woodcock have been quite prevalent this winter, there are certainly more than last winter. We believe these birds to be migrants from Russia and Eastern Europe.

We have been coppicing another two acres this winter and things are developing nicely. It is amazing how previously dormant seeds suddenly germinate once light gets onto previously shaded out areas. An area we cut two years ago for example was full of foxgloves last spring for the first time in decades. 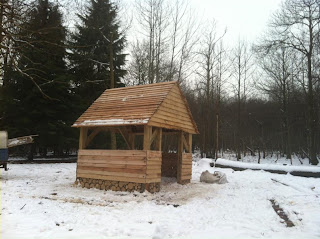 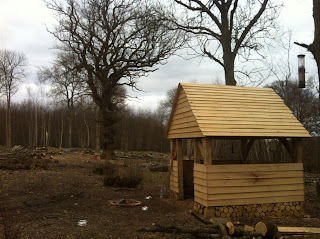 Logging with John & Bob (The Horse)

Back in Spring 2011 I asked local woodsman and horse logger, John Mancini, to extract some larger sweet chestnut stems from an area of Cutler´s difficult to access with a tractor. John used his horse Bob for the extraction work and these are some pictures of Bob at work. There is something special seeing horses at work and there are the added advantages of less soil compaction and the horses ability to work in tight areas where the use of a tractor would cause considerable ground damage. They are also surprisingly quick. 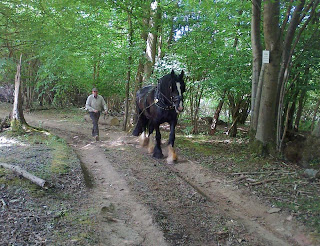 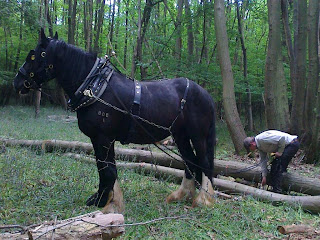 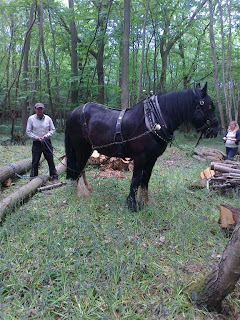 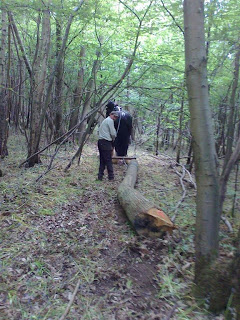 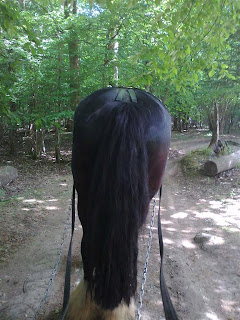 All photography by John Mancini

UPDATE March 2016
Due to the actions of a few ignorant people, leaving their dogs roam freely through the woods and disturbing wildlife, people who have, upon being asked to keep their dogs on a lead or leave, then felt it neccessary to be abusive towards me, I have decided with immediate effect to close Cutler's Wood completely to the public.
There are NO PUBLIC RIGHTS OF WAY through Cutler's Wood.
In future anybody found trespassing in Cutler's Wood without authority from myself will be asked to leave. Due force will be used against those who refuse to comply.
It is unfortunate that I have been forced into this decision but it seems that in this day and age, more and more people seem to be of the opinion that they can do what they like, wherever they like.

Poachers, vandals, litterers or fly tippers will not be tolerated and will be prosecuted. Any unauthorized weapons will be confiscated and immediately destroyed. There have been recent incidents of poaching, where deer have been shot and wounded by poachers, even using inappropriate weapons such as shotguns and crossbows. These people show a total disregard for nature and need to be brought before the courts. For any information leading to the positive identification of poachers, vandals, litterers or fly tippers, we will pay a reward of 200.- Pounds.